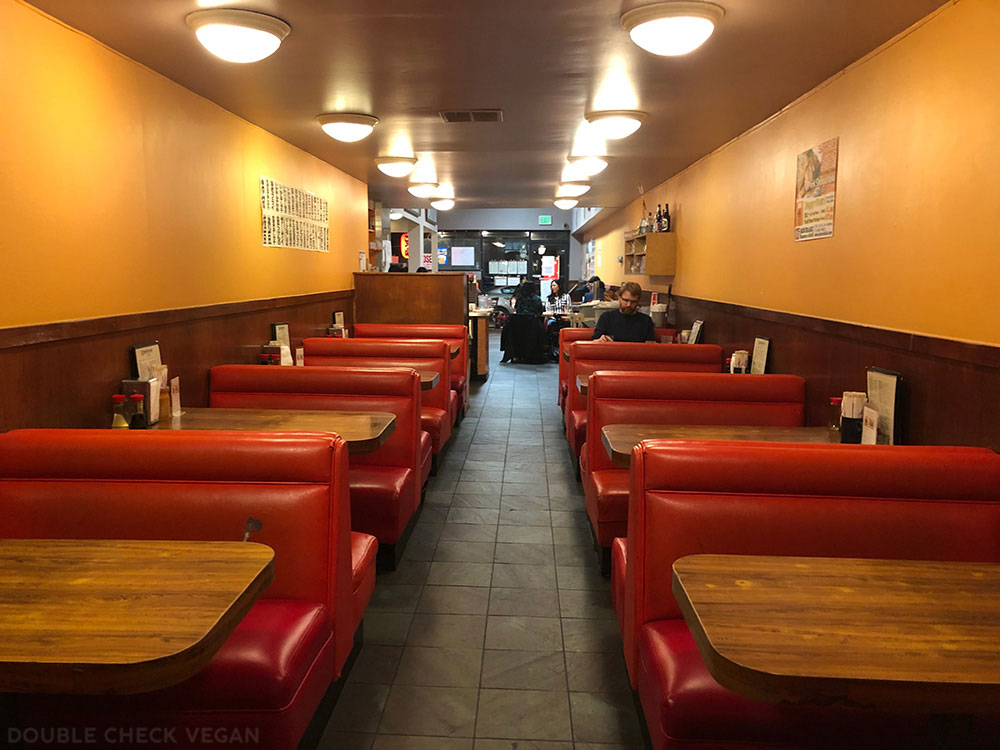 Los Angeles is home to an ever-shrinking list of delightfully vintage restaurants. But if you’re a vegan looking to experience the old school charm of this otherwise vegan-friendly city, it can sometimes feel like you have to do it with a side of plain toast or fruit salad.

This short list was a long labor of love. I examined the current menus of every restaurant on Nikki Kreuzer’s list of the Oldest Surviving Los Angeles Restaurants – that’s around 445 restaurants. And then I looked up even more restaurants that for one reason or another weren’t on her list.

I ended up with eight restaurants that met my criteria for being both old-school and truly vegan-friendly. I then visited the four of these that I was not already familiar with.

Here’s a list of 8 old-school LA restaurants with legit vegan options. To be included, a restaurant had to meet all of these criteria:

Still, some restaurants on this list offer a better selection than others. More details are included below. After the list, keep reading for some honorable mentions.

(listed in order of date founded) 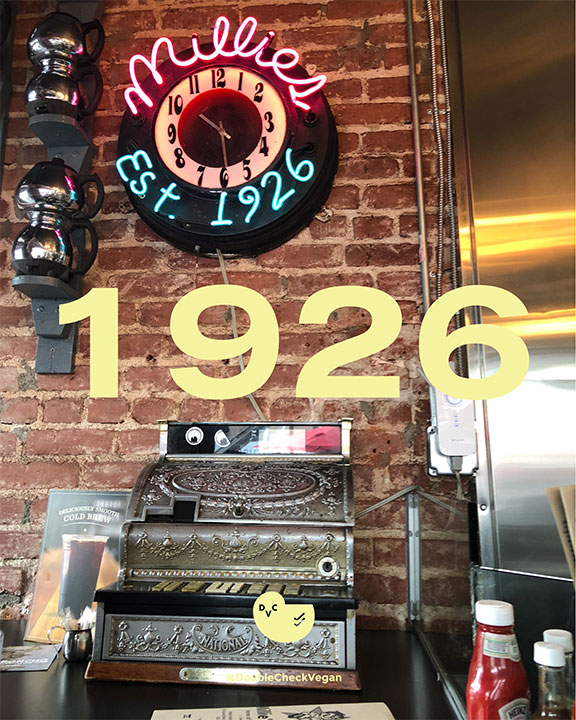 Millie’s Cafe has been operating out of the same space in Silver Lake since 1926, and under the same name since at least 1941 according to the LA Times, though ownership has changed over the years. The original interior space is tiny, with just a few stools at a counter where you can watch the cooks. The diner has expanded into a larger room next door and there’s lots of sidewalk seating.

In late 2018, Millie’s opened a second location in Pasadena, just northeast of Bungalow Heaven at 1399 Washington Blvd, a commercial space built in 1925 and which was home to Hillcrest TV in the 1960s.

Millie’s Cafe offers an extensive, two-sided menu page of vegan options, with breakfast on one side and lunch on the other. I heartily recommend the Angel’s Mess, the California Benedict, the Usual, and the Reuben. There’s still a lot on the menu I haven’t even tried. Even if Millie’s had no history or charm, it would still be one of my favorite LA spots for vegan brunch.

Tip: When ordering from the vegan menu, be sure to ask for vegan butter if your dish comes with toast. 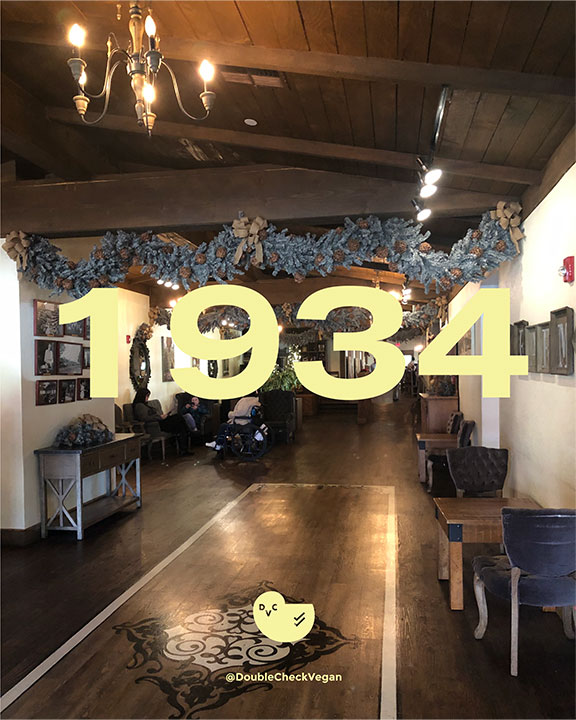 Knott’s Berry Farm, the strangely named amusement park, actually grew out of a restaurant, which grew out of a berry stand. Married couple Walter and Cordelia Knott grew and sold berries in the 1920s from their property along Highway 39. In 1934 during the Great Depression, the couple opened a tea house and served dinner to the public on their own wedding china to make ends meet.

As Highway 39 became an increasingly popular thoroughfare between Los Angeles and Orange County, the restaurant’s popularity grew. The couple began developing attractions and diversions to entertain people waiting for a table. Though remodeled, the restaurant retains farmhouse charm with booths and exposed wooden beams. There are also old enlarged black and white photos of people waiting outside the restaurant, and a little museum display case.

Admission to the park is not required to dine at Mrs. Knott’s Chicken Dinner. Unfortunately, you have to know there is a vegan menu in order to see it. Staff do not offer it on arrival and there is no mention on the current menu. However, once you have it, the menu includes several options.

I have to add, I was advised by the waitress as well as Yelp reviews to avoid the vegan mac and cheese. I did enjoy the salad with vegan caesar dressing as well as the vegan chicken fingers and fries, though I felt uneasy when I thought of how many real chickens must have been killed over the years for this place. 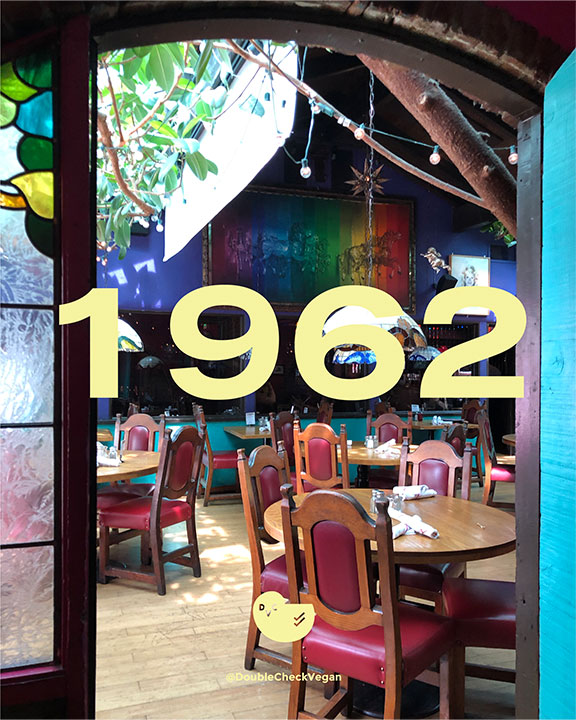 Casita del Campo was opened in May 1962 by married couple Rudy and Helen Del Campo, and Rudy’s sister Beatriz Stewart. Rudy Del Campo had been a Broadway dancer and played a member of the Sharks named Del Campo in the 1961 film version of West Side Story.

In 1965 Rudy met Nina who would become his second wife. According to the Casita Del Campo website, Nina Del Campo has run the restaurant since the 1960s.

While the vegan section only includes four items, I felt that combined with the endless chips and salsa and some other things on the menu like guacamole, it added up to enough.

If you head down the stairs at Casita Del Campo, you’ll find the 50-seat Cavern Club Theater which regularly hosts drag shows. 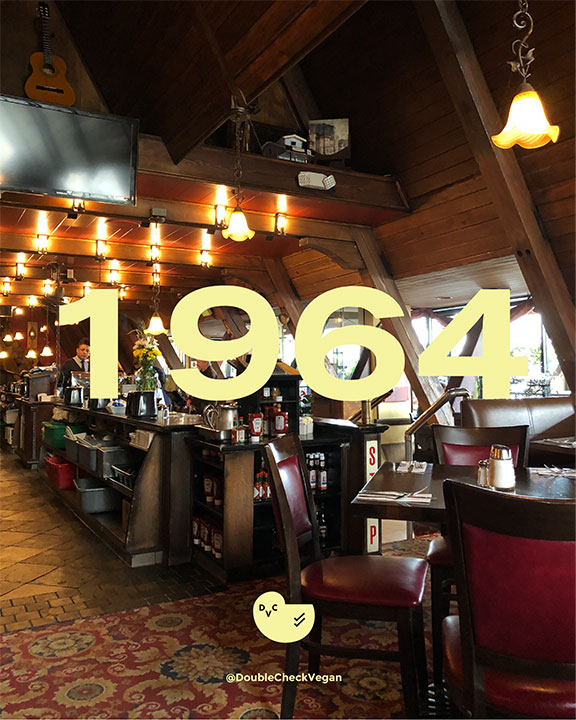 Just across Colorado Boulevard from the ever-expanding chain stores of the Americana shopping complex, Foxy’s anachronistic A-frame building and old-timey sign is hard to miss. Though it’s been somewhat remodeled, the restaurant interior retains a 60’s ski lodge vibe with exposed wooden rafters, a river rock fireplace, waiters in vests, and many more little details that add up to one cool vibe.

The Foxy’s menu booklet has one page dedicated to vegan options. While it’s not extensive, it’s presented with pride, and the dishes I’ve tried – the breakfast burrito and strawberry banana French toast – were tasty and filling. 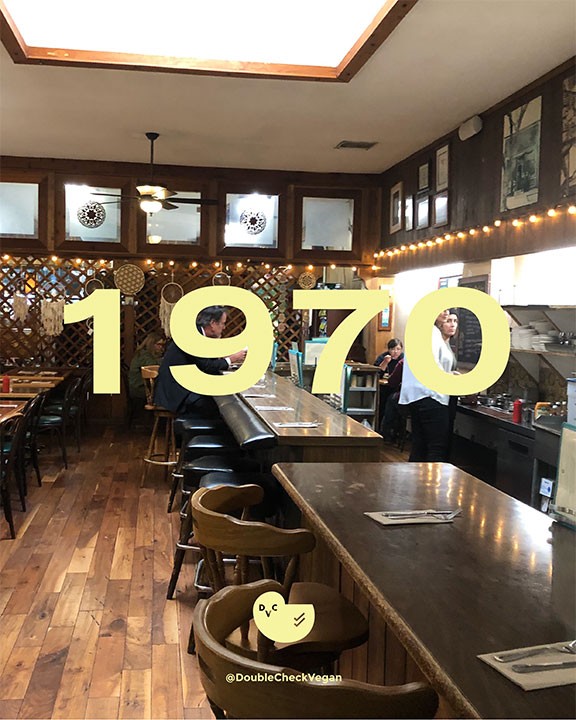 Readers outside of LA may recognize the name Follow Your Heart as the brand behind popular vegan products like Veganaise and VeganEgg. The same company actually started out as a vegetarian cafe and health food store in 1970. In 1976, the cafe moved just a few blocks to its current location, along with the original counter which is still in use today.

In mid-2018, the cafe went from vegetarian with vegan options, to everything on the menu being vegan except for a few items marked “dairy optional.” Their new vegan cheese plate is phenomenal. I also recommend ordering from their selection of stuffed baked potatoes. 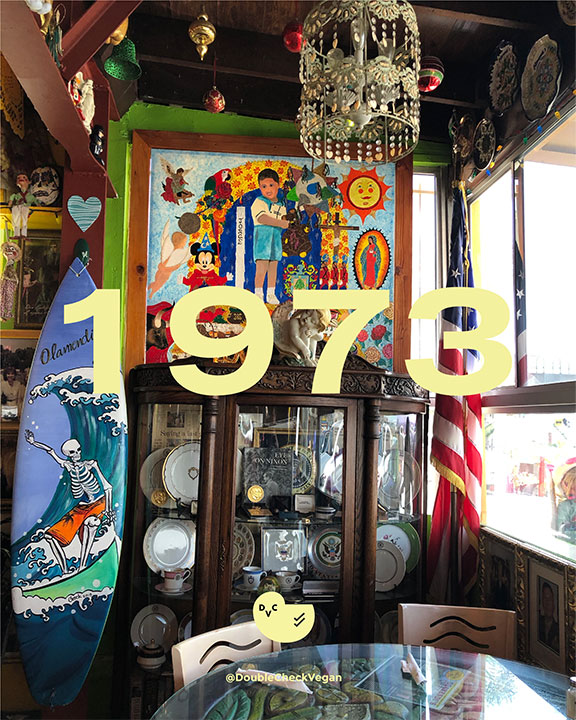 Located on the Pacific Coast Highway, directly across from the beach, Olamendi’s serves Mexican food along with some unique presidential history.

The restaurant interior is packed from floor to ceiling with a mish-mash of decor that can only come from decades of accumulation. Lurking amongst the paintings, papel picado (Mexican papercut designs), sculptures, and Christmas-tree ornaments are numerous framed photos of Richard Nixon, as well as a case of Nixon memorabilia.

Nixon regularly ordered takeout from Olamendi’s to his nearby San Clemente Estate, and eventually became close with the Olamendi family. Many of the photos show Nixon with Olamendi family members.

Olamendi’s opened in 1973 in San Clemente and two years later moved to its present location in Dana Point. A 2016 LA Times article mentions that the vegan menu section was inspired by Olamendi’s vegan son.

Though Nixon is most remembered for his complicity in the Watergate cover-up, his legacy spans some positive steps for animals. In 1971, President Richard Nixon signed the Wild Free-Roaming Horses and Burros Act which had been unanimously passed by congress to protect these animals.

Unfortunately, this act has been hobbled in recent years, especially since 2004 when President George W. Bush signed an amendment which allows these horses to be sold, and some have since ended up slaughtered. 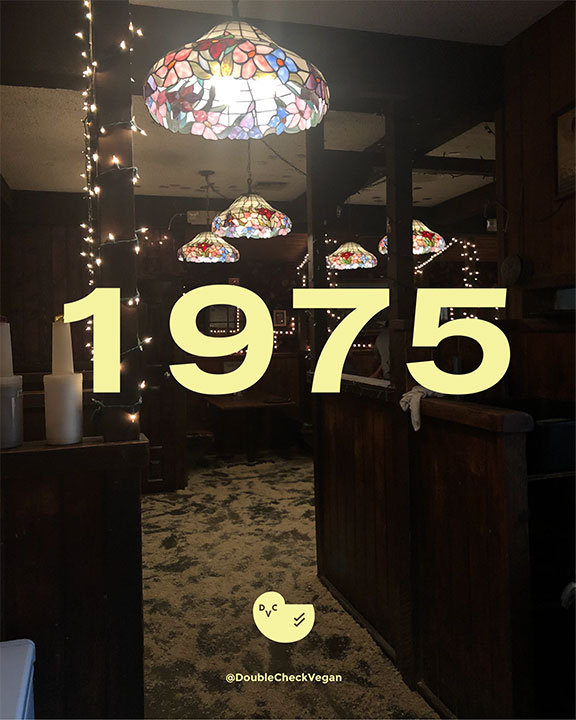 UPDATE: Within the time I’ve been working on this post, the Original Pizza Cookery sadly lost its lease in Woodland Hills. But, they have since relocated to Thousand Oaks. Hanging stained glass lamps have been replaced by recessed lighting, but the great vegan options remain.

The full-page vegan menu at the Original Pizza Cookery is a gem within a hidden gem. In an unassuming strip mall in Woodland hills, visitors to the cookery will find saw-dust covered floors, wood-paneled booths, and stained glass lamps, as well as placemats with facts about Italy.

Tip: Complimentary garlic rolls are served while you read the menu, so tell the host you’d like vegan rolls right when you’re being seated – otherwise they’ll bring you non-vegan ones.

Kouraku, which claims to be the oldest existing ramen restaurant in the United States, is also one of LA’s only vegan-friendly late-night spots, with hours from 11am – 3am, Monday through Saturday, and until midnight on Sunday.

Current owner Hiroshi Yamauchi purchased the restaurant in 1986, just ten years after it originally opened. Kouraku’s menu now has a vegan section with three types of ramen among other choices.

Here’s a list of honorable mentions. These are all old-school LA establishments that serve some thoughtful vegan options but don’t quite meet all of the criteria for the above list.