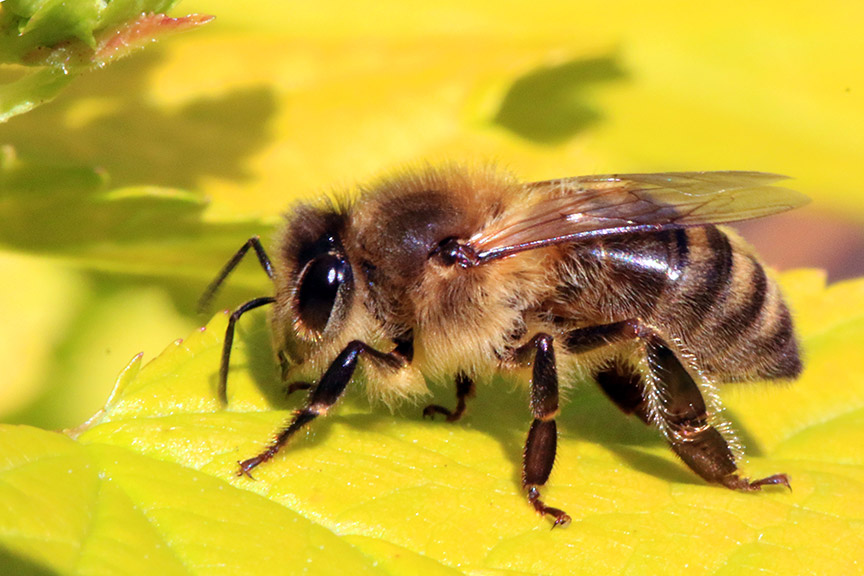 There seems to be a lot of confusion over whether honey and bee products like beeswax are vegan. But the answer is really simple.

The simplest explanation for why honey is not vegan is by definition. “Vegan” describes something that has no ingredients derived from living or killed animals. Honeybees are insects and insects are part of the animal kingdom.

But don’t some vegans eat honey?

My dad keeps kosher – or a version of kosher. He doesn’t have two sets of plates, and he drinks regular wine. That doesn’t make regular wine kosher, and it doesn’t mean that a wine bar could start telling customers that their regular wine is kosher because they once saw my dad drink some. My dad makes some exceptions. A few people might say, “I’m vegan but I eat honey.” This does not make honey vegan.

Who is honey for?

Just as cow’s milk is not considered vegan because the cow produced it for its offspring, bees produce honey for their hive. You may say that you think it is ethical to consume honey, but you can’t change the definition of “vegan.”

So, what if I don’t care about whether honey is vegan?

Definitions aside, when we look at the labor entailed in honey production and its harvesting by humans, as well as our limited but growing understanding of bee cognition, you might agree that there are not that many differences between using honey and using other animal-derived ingredients. When humans use honey, it invariably involves the exploitation of bees’ labor, bodies, and lives.

What is honey and how is it made?

Honey is a substance made by bees to feed themselves. The process of making honey involves several steps. Some people think honey is simply plant nectar that has been transported by bees but in fact, bees must process nectar to turn it into honey.

It takes at least eight bees their entire lives to produce a single teaspoon of honey.

First, a honeybee flies to a flower and uses its proboscis (tongue) to suck up and ingest the flower’s nectar. The bee stores the nectar in its honey stomach which is separate from its food stomach.

In the honey stomach, an enzyme produced by the bee called invertase starts to transform the nectar into honey. The bee visits between 100 and 1500 flowers before filling up its honey stomach. When full, the honey stomach weighs almost as much as the bee itself.

Once the bee has a full load of nectar, it flies back to its hive. There the bee will regurgitate the nectar and enzyme mixture and transfer it to other worker bees. These worker bees chew the nectar mixture, thereby reducing its water content.

The bees then put the mixture into a honeycomb cell for storage (honey comb is made by worker bees from wax in their abdominal glands). Bees then fan the storage cells with their wings to reduce the water content even more, resulting in honey. Once the honey is ready, the bees cap the cell with wax, sealing it off. It takes at least eight bees their entire lives to produce a single teaspoon of honey.

Why do bees make honey?

Bees make honey as food for their young and themselves. They store extra honey in honeycomb cells for the winter. Unlike other bees, honeybees do not hibernate. They huddle together in their hive and eat their stored honey. Honey is the perfect source of energy and nutrients for honeybees.

Most honey comes from large scale commercial operations. In these operations, bees’ lives are valued only insofar as they are profitable. In other words, a low rate of survival only matters if so many bees die that it effects a company’s ability to profit off the honey the bees create.

Queen bees may be artificially inseminated, killed and replaced, and bees may be shipped via the post office in boxes, or trucked all over the country to gather more pollen to produce more honey.

Beekeepers may take all of the honey to sell, and meanwhile feed the bees with sugar water which lacks fats, proteins, and enzymes present in real honey. Beekeepers may also take bees’ winter store of honey so that the bees produce more honey sooner than they would have naturally.

But do bees feel pain or care?

The jury is still out on whether bees feel pain. Recent studies in which bees demonstrated optimism and pessimism, showed that bees have more cognition than previously thought.

Realizing that within our lifetime scientists went from believing fish and lobsters don’t feel pain to proving that they do, why not err on the side of caution?

What about honey from an “ethical” local beekeeper?

Just like a cow may produce more milk then her calf can drink, a honey bee might make extra honey. But basing a business on possible leftovers is not scalable. If one year the bees do not produce extra honey, will the honey business take a year off? There’s also no way to take so-called extra honey without disrupting the animals in some way.

There are vegan beekeepers

Vegan beekeepers provide homes for bees but do not harvest honey or honeycomb for commercial use or for their own use. But humans can benefit from vegan beekeeping in other ways besides knowing they are helping bees. When honeybees fly from flower to flower ingesting nectar, they inadvertently transfer pollen between male and female flowers, thereby pollenating plants. They’re not always as efficient at pollinating as other native pollinators like hummingbirds, but still, they may help your plants a bit.

This section may contain affiliate links.

And, if you’re not sure about whether certain ingredients are vegan, try putting them in our vegan ingredient checker.