Based in Los Angeles, Givhan is also a guitar shredder who has toured with Saul Williams, Amen Dunes, and Chris Cohen, and even traveled to Senegal and NYC playing in Lauryn Hill’s band.

I like to think of the lyrics being about both immigration in this country, and interplanetary, Star-Trek-like emigration.

I interviewed Davin about being a vegan touring musician, his music practice regimen, songwriting process, new song, and more!

Davin: In 2012 I had been vegetarian for about thirteen years. Then I read “Eating Animals” by Jonathan Safran Foer and that made a big impact on me. Around the same time, I had a roommate who was vegan and we had some conversations that were influential.

DCV: Tell me about your new song, “Never Going Home.”

Davin: “Never Going Home” was recorded at my friend’s private studio in San Pedro, CA, last summer. It was engineered by my friends Ken Negrete and Joel O’Neill. The studio is all analog, meaning there aren’t any computers involved in recording and mixing. We recorded to 2″ tape and mixed down to 1/4″ tape. When the final mix was finished that was the point at which we  sent the song into the digital realm, aka, the computer.

I played all the instruments separately, which is pretty common for multi-instrumentalists. But since we were recording to tape, my goal was to record as many full takes as possible and do as little editing as possible. The drums, bass, acoustic guitar, guitar solos, and percussion were all full takes, no edits. The other stuff needed some punch-ins here and there, but there were still no edits in the way that you might do when recording on a computer. It’s definitely a more challenging way to record than the modern method, but I was up for the challenge and I’m happy with how it turned out.

As for the lyrics, I think of them being sung from the perspective of someone who’s left their homeland in search of a better life only to arrive at a place that’s hostile to their arrival and not much better than the home they left. In the pre-chorus they’re saying “hey, if you accept me I can help you create a more peaceful world” (in English and Spanish (wink-wink)), but then the chorus is kind of saying “this is harder than I thought and now I’m stuck here, but I still choose to make this my new home.” I like to think of the lyrics being about both immigration in this country, and interplanetary, Star-Trek-like emigration. 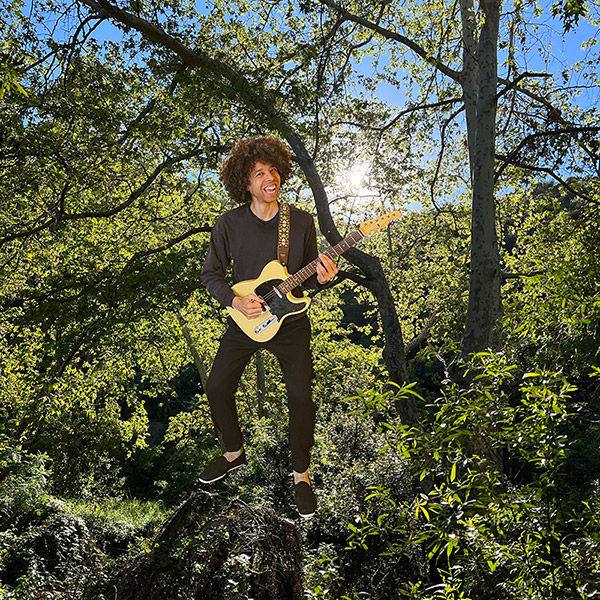 DCV: What else are you working on these days as far as your own stuff? And what other projects are you involved in?

Davin: I’m working on a batch of new songs that I’m recording by myself in my studio at Downtown Rehearsal. These songs are turning out to be a bit more funky and experimental than my previous stuff, which is fun. I’m hoping to finish them up in the next month or so and hopefully release them this summer as an album. Also, I want to put a live band together to play some shows this summer.

As for other active projects, I play bass and sing harmonies in the Chris Cohen band, I play guitar in the Jonny Kosmo band, I occasionally play guitar for Diana Gordon, I play guitar on my friend Billy Uomo’s recordings, I sometimes play bass in the Earth Girl Helen Brown Center for Planetary Intelligence Band, and I also play on recording sessions for various folks around town.

DCV: What’s the most vegan-friendly city or venue you’ve experienced? And, what’s the best vegan meal you ever had on tour? Or anywhere in the world whether on tour or not?

Davin: I don’t have a solid ranking system, but I usually say that Berlin, Germany is the most vegan friendly city I’ve experienced. But also, I live in Los Angeles and I’ve never seen a higher concentration of vegan food options than there are here. But I kind of got the feeling that Berlin, and maybe Germany as a whole, seemed to have more tolerance or mindfulness towards a vegan lifestyle. Also, Germany has an abundance of savory vegan spreads & patés that you can buy at grocery stores, which I haven’t been able to find in any other country I’ve been to, which is sad because they’re so good!

DCV: What’s your favorite meal to cook at home?

Davin: My favorite meal to cook is rice & beans, because I grew up eating delicious Puerto Rican “arroz con habichuelas” which my grandma still makes regularly. My rice and beans are delicious, but they’re not “Granny Level” yet…but I’m still learning. 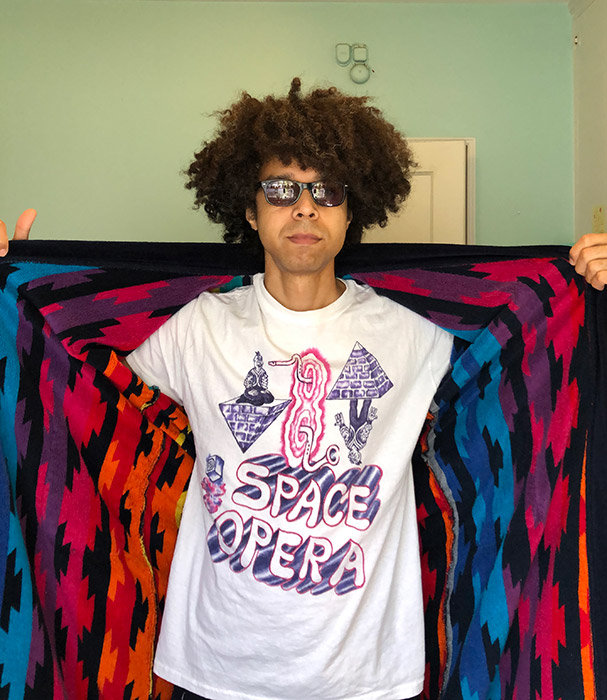 DCV: What do you pack so you don’t get hungry on the road? Do you have any tips in general for traveling as a vegan?

Davin: I generally pack apples, bananas, nuts/trail mix, and sometimes I’ll have an energy bar. My main tip for vegan traveling is to be prepared and pack as many snacks as possible. There are definitely large swaths of the US and Europe that I’d refer to as “vegan deserts”, e.g. the American South, France, etc. My tip: avoid those places.

DCV: How has it been being vegan on tour? Have the bands you’ve traveled with been supportive? Has it changed over time?

Davin: I’ve found that the ease or difficulty of being vegan on tour depends on who you’re touring with. When bands get hungry on the road there’s usually some kind of semi-democratic voting method about where to stop for food. When I’m on tour with bands that are my friends, there’s definitely more empathy for finding vegan food options, even if there aren’t any other vegans in the band.

But there have been times when I was on tour as a “professional musician” with groups of people who don’t know each other very well, and in those instances it seems like the default is to stop for food wherever it’s available and/or most convenient or efficient for the travel schedule.

Those are the times when eating vegan can be challenging. But like Bob Dylan once said: “the vegan times they are a-changin’”…and it does seem easier to find vegan menu items each time I travel. The general trend seems to be “more vegan options”, which is heartening.

DCV: I read that rapper/poet Saul Williams is vegan. Did this come up at all back when you played in his band?

Davin: Yeah, definitely. When I was on tour with Saul I think he’d only recently started his vegan lifestyle, so he was really vocal about it. I was already a vegetarian then, but I remember Saul would sometimes preach the gospel of veganism to his other two band members, which I always found entertaining. I hadn’t done many tours at the time but it was definitely the first tour I’d been on with a vegan bandleader, and it made a big impression on me.

While we were driving across the country Saul would be looking through the Happy Cow directory to find vegan restaurants in the next cities on our itinerary. I really loved that. One time, I heard Saul even had vegan food delivered to an airport where he was getting on a connecting flight…it wasn’t even his final destination!

DCV: Who were your biggest musical influences when you got into music, and what inspired you to play?

Davin: When I became an “active” music listener, at age 7, I wanted to listen to what my cousins were listening to: Run-DMC’s “Raising Hell”, U2’s “Under A Blood Red Sky”, and Guns n’ Roses’ “Appetite for Destruction.” When I was 10 or 11 my cousins introduced me to Metallica and I got so obsessed that I decided I wanted to learn how to play their music. My life has been in shambles ever since.

DCV: Who inspires you now? What are your favorite current musicians/albums?

DCV: Do you still practice guitar or other instruments? If so, what’s your practice regimen like?

Davin: Yes, I still try to practice guitar as much as possible, and I’ve been practicing piano regularly since July 2020. For both instruments, I’ll start out by praying to the Gods of Shred® and then I’ll do some warm-up exercises.

Guitar warm-ups are usually some Bach violin pieces, scale/chord exercises, and/or random improvisation. But I try to balance the technical stuff with songwriting and creating new rhythms, melodies, textures, etc.

DCV: For your own music, what’s your process like? Do you treat it like a job or wait for inspiration? Is there a part of songwriting that comes naturally and an aspect that’s hard for you?

Davin: My music writing process generally begins with playing an instrument. When I’m playing guitar or piano, I’ll eventually play something new that sounds good to me and I’ll either record it immediately so I don’t forget or I’ll keep working on it.

Sometimes there’s a vocal melody that I come up with to go with the chords. Then I’ll just make different recordings of those chords/melodies and add more rhythm elements: drums, bass, more guitar, and continue to develop it. Sometimes those ideas turn into instrumental songs and sometimes they end up being more traditional verse/chorus kind of songs.

Coming up with chords and melodies comes pretty naturally to me, but writing lyrics can be challenging if I don’t already have a subject in mind. It’s rare that I have lyrics written first, but I’d like to try that method more in the future. But it’s common for me to come up with words at the same time as the melody, even if they’re nonsensical. I find that those nonsense lyrics usually tap into the mood/feel of the chords better than anything I can come up with after the fact.

DCV: If you could play in any band, what would it be? It could be from the past, or present.

Davin: All the bands that I love!

DCV: You have written very funny pieces for the satirical punk news site, The Hard Times. Are you working on any other writing projects?

Davin: Thank you. I’m not working on any other writing projects right now, but for the incredibly low price of $49.99 per month I can write you 5 sonnets, 2 autobiographies, and 8 leaflets in your favorite style of humor. I just made this up right now but it sounds like a solid business idea.

DCV: Do you have any companion animals? If so, tell us about them.

Davin: Yeah! I live with a beautiful six-year-old black cat named Yoda-Marie. She loves humans, hates cats, hates music, and is the opposite of a vegan. I love her very much.

DCV: What’s the most annoying thing anyone’s said to you about being vegan?

Davin: Contrary to what I wrote previously: in Cologne, Germany a man once said to me in heavily accented English, “We-gen?! There is no we-gen food in Cologne!”

DCV: Is there any other question I should have asked you that you want to answer?

P.S. I met Davin a few years ago when he played bass on a few of my songs I recorded with Chris Cohen. They will be on my next album which will hopefully come out in 2023.