This site has had a spike in traffic since the new year. I assume it’s because a lot of people have new year’s resolutions to go vegan in 2018, which excites me! There is more delicious and affordable vegan food available worldwide than ever, so it’s a great time to dive in. I’m going to share some of my going vegan story, and what I found helpful for making the switch.

For me, and many other vegans, it turned out that switching my diet was the easy part of going vegan. The hard parts were the initial mental block before I hpulled the trigger, and adjusting socially. This post is more about the mental aspect of going vegan. For more nuts and bolts tips, including a two-week meal plan, check out PETA’s 2018 guide.

This stand-up segment from vegan Saturday Night Live writer Julio Torres makes light of some of the social stresses of going vegan.

What is the mental block?

Before I went vegan, the idea of it made me think of loss, of giving things up. Fear of change can make us focus on and blow out of proportion what we will lose instead of looking forward to what we will gain. But it turned out that going vegan has been a huge net gain for me in terms of both food experiences and other aspects of my life. It’s easy for me to say this now, and I wish I could have reassured my former self and not delayed as long as I did. My experience is going to be different from a lot of people’s – I live in a major city, am financially stable, and am in good health – so my transition was definitely easier than say, a teenager living at home whose parents refuse to cook vegan meals. If you are that teenager though, there are many of you out there – I read your posts every week in various forums. Scroll down for the section on “support” for ways to connect.

Back to the mental block. The truth is that today, what we choose to eat has more to do with culture and tradition than flavor or health. We associate food with people we love and memories, and forget that they can be separated. But it’s important to remember that traditions don’t exist in a vacuum.

Food traditions, like eating meat, are often reinforced by corporate interests. Think of advertisements that link certain foods to holidays and family values. Kids today in Japan might have no idea why they eat KFC for Christmas. That tradition stems from a clever marketing campaign, just like the tradition of using diamonds for engagement rings. Industries also shape what we think of as healthy. The USDA’s nutrition guidelines are influenced by lobbyists and many of the scientists working on them are nominated by corporate lobbying groups. I’m not going to go into a whole health article here, but you might like to check out the website Great Vegan Athletes if you have any doubts about whether a vegan diet can be healthy.

There were some uncomfortable conversations in the beginning with some friends and family. But once they realized that going vegan was serious for me, things got back to normal. I still have my friends and family, as well as some great new traditions that are all the more meaningful because they’re our own.

What did I gain from going vegan?

Without a doubt, I’ve tried and enjoyed more different foods in the last 2.5 years than I did in my previous 33 years combined. I used to be a squeamish and picky eater, living on chicken fingers and french fries. I only knew how to cook two meals and ordered the same things at the same places over and over. Only after going vegan did I become a “foodie” and now feel a real sense of joy at mealtime. And if you were already a foodie, just know that the range of vegan food out there is VAST and there is lots to discover.

I also feel empowered that I can assert some control over what types of activities are funded by my money. I’m no longer afraid to educate myself on the impacts of my choices – and not just food choices – so that I can continue to alter my habits to live more in step with my values.

I’ve made new friendships based on these shared values of trying not to harm human and non-human animals, and the environment. When I’m in a new place, finding vegan food often takes me to more interesting and less touristy areas and it’s a way to find common ground with people in other places.

Also as a bonus, I lost the weight I had gained when I hit my 30’s.

People often go vegan for one or more of three reasons – to reduce animal suffering, to protect the environment, or to improve their health. Whatever you’re reason for going vegan in 2018, don’t be afraid to learn as much as you can, and internalize it. For me, it was animal suffering so that’s what I can speak to most. Even though I’ve always had terrible self-discipline when it comes to trying to lose weight, it turned out that changing my diet based on deeply held moral convictions was far easier. And science backs that up. A recent study showed that people who switched to a vegan diet for ethical reasons were more likely to stick to it. So if you want to switch for health reasons, it can’t hurt to watch the Joaquin Phoenix-narrated documentary Earthlings for some added motivation.

Once I let myself read and watch videos about how animals are treated, and also caught up on the latest scientific research on animal cognition, I couldn’t unknow these things. So when I see my old favorite cheese, I don’t feel craving – I feel sad. But there are a ton of other foods that bring me joy, like the all-vegan waffle stuffed with mac and cheese from Clara Cakes – it might actually be the best thing I’ve ever tasted. 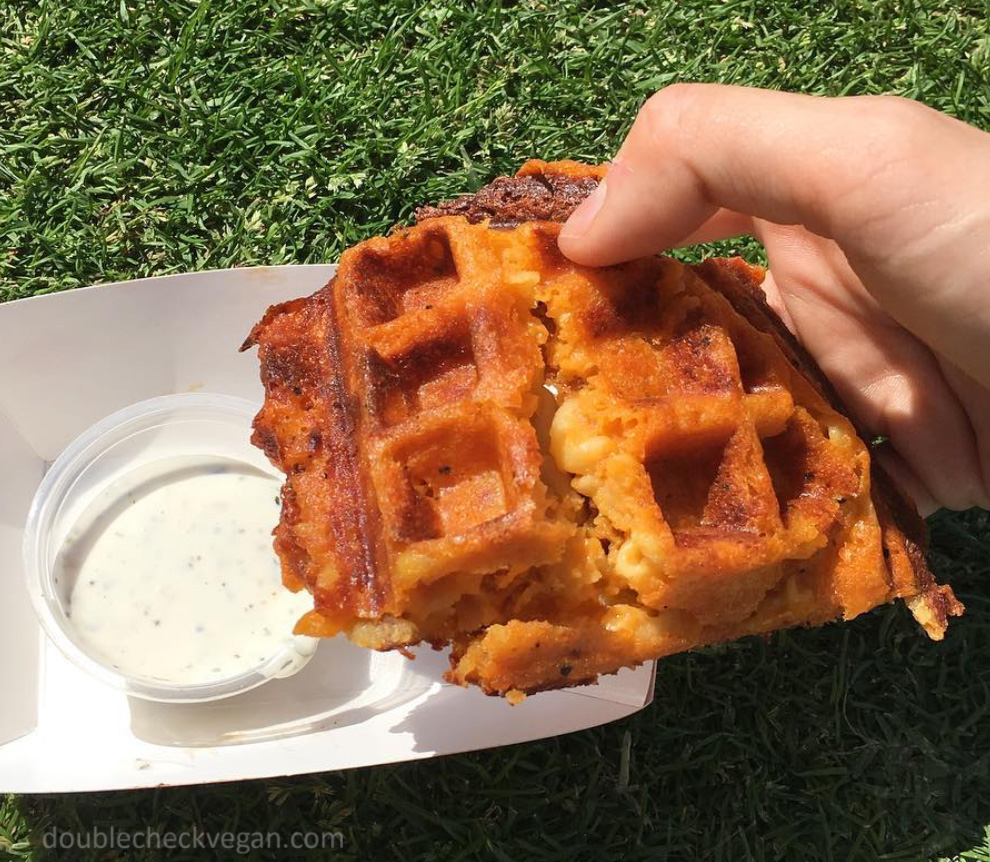 The first video that hooked me into this world was Peter Dinklage’s “Face Your Food” – I’m a huge Game of Thrones/Tyrion Lannister fan. Other videos that I found motivating are this one on the egg industry, drone footage of a factory farm, and this one on the dairy industry. Many people go vegan after watching the previously-mentioned Earthlings. I’ve since gone in person to see pigs just before they’re unloaded at the slaughterhouse in Los Angeles and have seen these conditions for myself. This education fuels me to continue to work for change, through my consumer power and other means.

If you’re interested in the animal argument for veganism, I recommend the philosopher Peter Singer’s book, Animal Liberation. He makes his argument about why the interests of animals should be taken into account, and then lays out rigorous research documenting the treatment of animals used for food and research. Meanwhile, many new studies show that animals have more emotions, more capacity for suffering, for planning, have greater family bonds then I at least was taught growing up. Here’s an article about pigs, and one about lobsters. You can find these alarming studies about almost any animal used for food, research, or kept in captivity for entertainment today.

Whether you’ve made the leap or are still thinking about it, finding other vegans to talk with or hang out with, in person or online, is encouraging and informative. If you’re going vegan for ethical reasons, there can be a hard period of adjustment where you feel angry around other people who are eating animal products. It’s important to remember you used to be the same and to remember what that felt like. And also realize that many other people are currently going through the same thing as you. And if you have serious allergies, medical issues, or don’t have financial or geographical access to a lot of vegan food, finding other people n the same boat can give you ideas for doing what you can.

You can find local vegan and worldwide vegan groups on Facebook. Try typing the nearest city to you and the word “vegan” and see what’s out there. Often you’ll find several options. I don’t know why I chose Cincinnati. 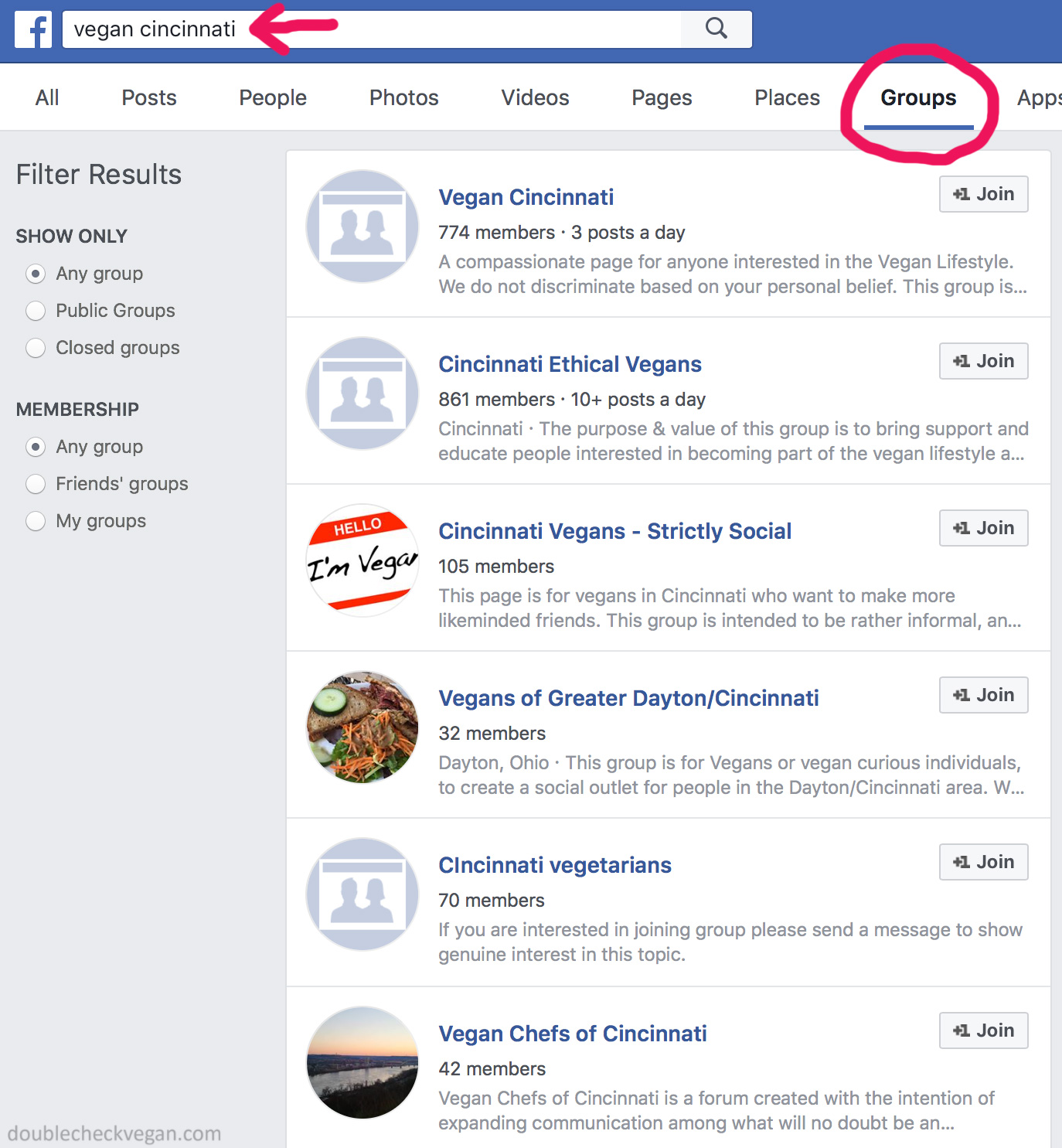 Besides local groups, you can find other vegan Facebook groups that meet your interests. For example, I’m a member of the Skeptic Vegan Discussion Group and What Broke Vegans Eat. Also, if you find people annoying in one group, try another one. Every group has its own personality.

I love reddit and I found r/vegan incredibly helpful when I first went vegan. If you’re not familiar with reddit, it’s a hugely popular website that hosts discussion boards for any interest you can think of. Each discussion board is known as a “subreddit.” The web address for the vegan subreddit is “https://www.reddit.com/r/vegan/” which is why you’ll see it referred to as “r/vegan.” All subreddits have that “r/” before it. There are also a ton of related subreddits like r/veganbeauty, r/vegancheesemaking, r/debateavegan, and so many more. Many people come to r/vegan seeking advice on how to go vegan, and as with anywhere, you’ll get a few trolls but on the whole people are excited to help and offer support.

Vegan food and lifestyle has exploded on Instagram. You can find accounts that focus on every aspect of veganism including cooking, local food, fitness, beauty, animal rights, junk food, health food, anything.

Depending on where you live, there may be instagram accounts that feature vegan food in your area. For example, if you search #vegancincinnati on instragram, there are only 340 posts. But if you check out who has been posting them, you might find people in your area to follow who regularly post vegan food but might not always use the hashtags. 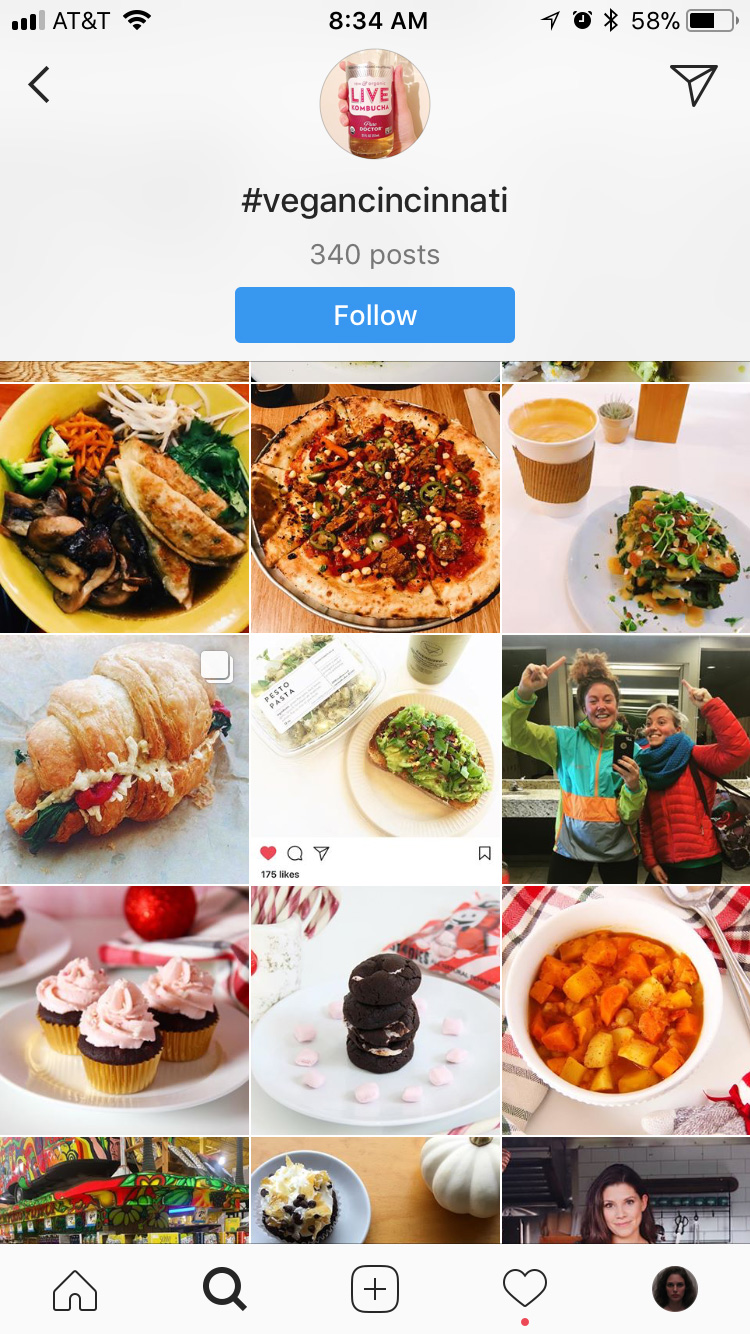 2.5 years later my only regret about it all is not going vegan sooner. I still check in on my local Facebook groups and reddit, but I don’t feel the need to do it nearly as often. I still follow vegan accounts on Instagram because I like to be the first to know when a new vegan option is available near me. I’ve figured out which supermarkets and restaurants have what I need and gotten back into a routine.

Other useful tools include the Happy Cow website or app for finding vegan food almost anywhere in the world, and this site’s ingredient search engine for checking if something is vegan. I actually created the search engine right after I went vegan so that I could use it!

I hope this post has been helpful for anyone going vegan in 2018.