Feel free to jump down to a list of vegan, cruelty-free, reef-safe sunscreens. Or keep reading to learn about newly restricted sunscreen ingredients, nanoparticles, and more.

If you haven’t heard, Palau, an island country in the western Pacific Ocean, is set to be the first country to ban the sale and use of sunscreens that contain certain chemicals known to cause damage to marine life and coral. The ban is part of Palau’s Responsible Tourism Education Act of 2018, which President Tommy Remengesau, Jr. recently signed into law, and which will take effect in 2020.

Palau is home to many natural wonders popular with tourists. One such wonder is UNESCO World Heritage site Jellyfish Lake, a marine lake protected by an ancient Miocine reef. In 2017, the Coral Reef Research Foundation found widespread sunscreen toxins in not only the water but also the jellyfish of the lake.

Other areas like Hawaii, Mexico, and Bonaire have also introduced sunscreen regulations, but Palau’s bill restricts the use of more chemicals than previous legislation.

These are the ten reef-toxic chemicals found in sunscreens, sunblocks, and skincare listed in Palau’s new bill. I have added them to the Double Check Vegan ingredient search engine so that if a user inputs a list of ingredients containing these, even if the chemical is technically vegan, the user will see the phrase “Vegan but…,” and a warning about this problem.

According to the United States National Parks Service, 4,000 – 6,000 tons of sunscreen enter reefs every year. Before we get to the most reef safe sunscreens, it’s important to realize that less residue from skincare products in general is better than anything. The Coral Reef Research Foundation’s 2017 report included these recommendations for preventing the environmental harm caused by chemicals in sunscreen.

Titanium Oxide and Zinc Oxide are two mineral ingredients that have not been found harmful to coral reefs. When you have to wear sunscreen in the water, sunscreens with these ingredients are better than ones that use the ingredients on the restricted list above.

Sometimes you’ll see Titanium Oxide or Zinc Oxide in an ingredients list followed by “(nano)” or “(non-nano)” or nothing at all. This refers to the size of the particles in the ingredient. Non-nanoparticles are generally bigger than 100 nanometers, while nano particles are smaller.

Sunscreens with the smaller nanoparticles are popular because they are small enough for the skin to absorb and therefore don’t leave as much visible residue on top. And, research so far has not found any negative effects on humans from absorbing these particular nanoparticles. However, since we don’t know for certain whether these mineral chemicals are 100% safe for coral reefs in the longterm, non-nanoparticles may be better simply because they won’t be ingested by reefs. In the following list, I’ve indicated whether a sunscreen uses nano or non-nano particles when that information is available. 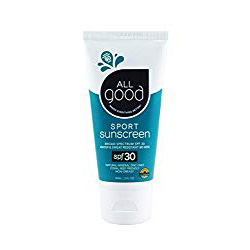 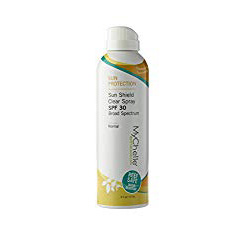 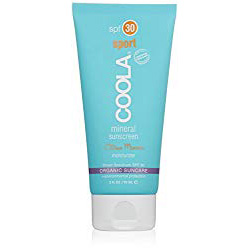