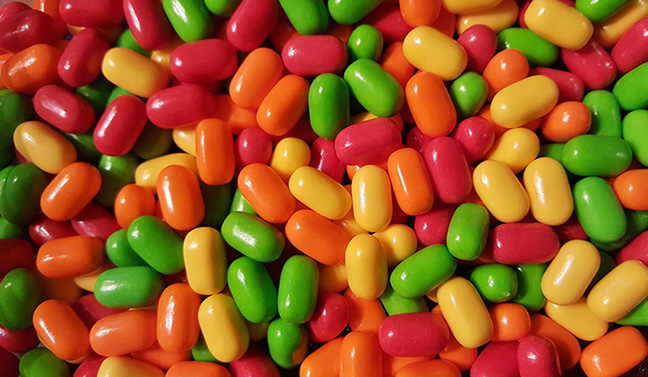 Updated: August 2019. I’ve loved orange tic tacs since I was little, so I’ve been a little afraid to ask, are tic tacs vegan? The answer is, most current orange tic tacs are vegan, and so are many other flavors, but some are not. It depends on which factory made the Tic Tacs – the same flavor may be vegan in one place, and not in another.

A customer service agent for Tic Tacs’ parent company, Ferrero, wrote to me that some tic tacs contain carmine and/or shellac which are not vegan, and some candy cane Tic Tacs contain dairy, but all other flavors are vegan. They also wrote that Ferrero does not use sugar or other ingredients that have been processed through bone char or animal rennet, and they do not do any animal testing.1

Watch out for these non-vegan ingredients in some Tic Tacs:

If you’re shopping online, use our free vegan ingredient search engine to paste and search all the ingredients at once.

Currently, any Tic Tacs with printed images on them, like the Despicable Me series, or the Valentine’s Day Be Mine Mix, use shellac, even if the base flavor is normally vegan.
This post may contain affiliate links.

A reader commented that they found a box of orange Tic Tacs in Australia that contained Shellac. The Tic Tacs listed as vegan below are based on the most recent information available on each country’s Tic Tac website. As of December 2017 on the Australian Tic Tacs website, orange Tic Tacs do not contain shellac. However, previous formulas may have contained it, so always check the ingredients and watch out for the non-ingredients listed at the beginning of this post. I wish it was simpler!

Tic Tacs is a brand of small, hard, sucking candies, owned by Ferrero which is also the owner of Nutella, Kinder Eggs, and Ferrero Rocher chocolates. Tic Tacs were introduced in 1969. Around forty-five percent of the world’s tic tacs are produced in Cork, Ireland. The Tic Tacs sold in the United States seem to be made in Canada.

What About Carcinogenic Food Colorings?

One of the reasons some flavors of Tic Tacs are vegan in the United States but not in other countries is because other countries have banned synthetic food dyes that are allowed in the U.S. Those countries end up using carmine made from bugs instead of Red 40 which is made from petroleum or coal byproducts. While carmine can cause severe allergic reactions, Red 40, Blue 1, and Yellow 5 have links to possible health risks including cancer and hyperactivity. However, in some of their newer flavors, Tic Tac has been using vegan and “natural” colorings such as beet powder and carotene, so it seems like pretty soon we’ll be able to have our cake and eat it too. 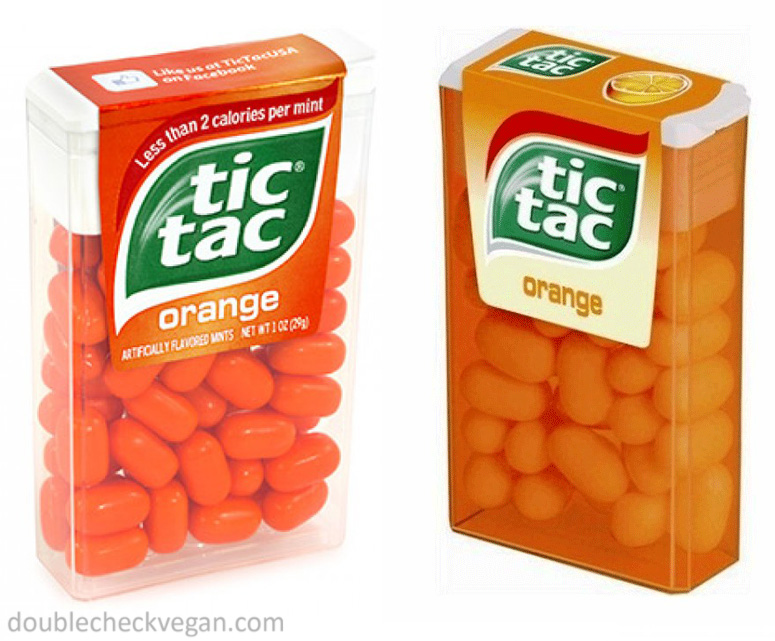 In Canada, orange Tic Tacs are actually white, and they come in a see-thru plastic container. I’d love to get my hands on some of those.

Ferrero Customer Service, 12/5/2017:
“Tic Tac flavors with carmine and shellac are not vegan. Candy Cane mints contain dairy. All other flavors are vegan.”

Ferrero Customer Service, 12/6/2017:
“Our Ferrero products do not contain any ingredients processed through bone char, or animal rennet.”

Use our free vegan ingredient search engine to check if something is vegan.