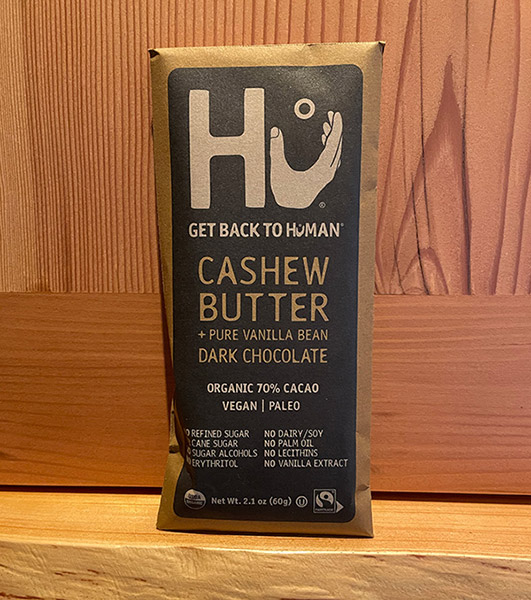 I’ve been frustratingly addicted to this vegan chocolate bar for a while now. Frustrating – not because it’s unhealthy – one thing I love about this bar is that it has less sugar than most – but because it’s an expensive habit.

First I’ll talk about the flavor, and then some other ways this bar is superior to others, in my humble opinion.

Important note about this review

Though it might seem otherwise from my gushing tone, this is not a sponsored post – Double Check Vegan does not do any of those. But, we do use affiliate links.

When I started writing about vegan chocolate and candy, I knew I wanted to write about this bar – this was probably three years ago. But since I had more pressing things to work on, I reached out to Hu to find out if they had an affiliate program, so I could make it a little more worth my time. When you buy something through an affiliate link, a blogger earns a small commission at no cost to you.

Well, at that time they did not. But, recently feeling the need to offset the expense of my chocolate habit, I checked again, and now they do! So, I guess I can justify waxing about chocolate for a few cents. Hu also now offers a referral program for customers, so if you order from Hu directly, you can get $5 when you refer a friend!

So Smooth and So Rich

Although this chocolate bar from Hu Kitchen is described as “dark chocolate,” to me, it tastes like a luxuriously rich milk chocolate and I have yet to experience this with any other vegan chocolate, even ones that purport to taste like milk chocolate.

The flavor of this particular chocolate bar combined with the way it softly melts in my mouth reminds me of something very specific:

In my pre-vegan childhood days, I was a dark chocolate lover. But my only experience with milk chocolate had been with so-called “barnyard chocolate” – namely, Hershey’s. That was until I tried a Lindt Lindor milk chocolate truffle. That’s when I realized milk chocolate could be delicious, though I hadn’t yet learned about the cruelty involved in taking another animal’s milk.

That rich milk chocolate flavor is what this Hu chocolate bar recalls for me. But better. While the Lindor truffle’s richness could be cloying if you ate more than one, the Hu Cashew Butter Bar is balanced just right. I’m guessing it’s the cashew butter that does the trick. I can’t quite describe what it is – it’s not a sweetness, it’s not a saltiness – it’s a richness and a creaminess.

A large percentage of the world’s chocolate is produced using slave labor and child labor. Some companies are more transparent than others about the source of their cacao. The wonderful non-profit Food Empowerment Project has put together a list of chocolate companies that they “feel comfortable recommending” and Hu Kitchen is on this list. Some of F.E.P.’s criteria to be on the list:

They are transparent about the country of origin for their cacao beans and the beans were not sourced from areas where child labor and slavery are most pervasive or are from areas where companies are going above and beyond to support the workers and their families.

The packaging says there are 2 servings in a bar. Some days I can manage to eat just a single square, some days I eat a whole candy bar. And some days I fantasize about doing what Ann Bass did – keeping the chocolate in a safe so it’s harder for me to get to.

Each serving has 9 grams of sugar, but only 8 grams of which are “added sugar.” Compare that to 24 grams of added sugar in a serving of a Hershey milk chocolate bar. Or 13 grams in 1/3 of my favorite Chocolove bar – orange peel in dark chocolate.

The back of the Hu Chocolate bar wrapper says “It’s time to get back to the way humans ate before industry ruined food.”

This statement captures the ethos of the Paleo diet which is limited to ingredients that could have been eaten by hunter gatherers before humans started farming.

As of 9/25/2021, the Hu website says, “All of our chocolate bars are considered paleo except for Almond Butter + Puffed Quinoa (another one of my favorites) and Vanilla Quinoa Qrispy, which are considered primal.”

What does this mean exactly? According to the Paleo Foundation, which certifies food products as paleo today, something that is paleo excludes grains, pseudo grains, legumes, some dairy, and highly refined foods. That’s why the sugar in the chocolate bar is “unrefined.” It’s processed with fewer steps than a refined sugar.

Quinoa is a grain so the bars that have it are not paleo, but are okay on another slightly less restrictive diet – Primal. Hu Kitchen was founded in the spirit of wellness. It’s not a vegan company. Their flagship restaurant serves animal flesh.

However, in the last few years they seem to have become more vegan friendly. They’ve expanded their vegan chocolate line with more products like “chunks,” and they obtained vegan certification from Vegan Action for their vegan offerings.

As of January 2022, their entire chocolate line is vegan.

Are you a chocolate lover?

I would love to know your favorite vegan chocolate bar. Please share in the comments!